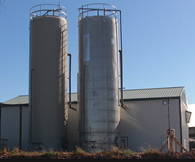 Mains Dairy Farm is family-owned, founded in 1997 by Daniel Mains and his father, Francis. The farm’s herd has grown to approximately 800 cows over the past two years—730 milk cows, 125 dry cows, and 60 heifers are contributing manure to the digester. The farm employs six people.

NativeEnergy carbon offset purchases aided the family’s commitment to environmental stewardship and economic innovation. On behalf of our customers, NativeEnergy bought, in advance, the carbon offsets associated with the operation of the digester. This provided upfront funding for a significant portion of the total capital costs.

The digester engine stopped running at the Mains farm sometime in 2016, and the farm lacked funds to make necessary repairs. For a few years, the digester continued to operate and flared the methane that was produced, so the methane emissions reductions were still achieved, but no electricity was produced. In 2018, the digester ceased operations. The project achieved 10,545 tonnes of CO2 equivalent reductions out of the originally forecasted 43,300. However, due to the success of our other Pennsylvania digester projects, this deficit is well on track to be made up by other projects.

This project is a collaborative effort between the Mains, NativeEnergy, and Environmental Management Group International.

This project was validated using Climate Neutral Network methodologies. The project’s performance was third-party verified every other year.