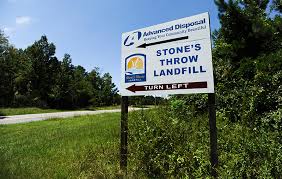 The Stones Throw Sanitary Landfill began accepting waste in 2002 under the ownership of Stones Throw Landfill LLC, a subsidiary of Advanced Disposal Services LLC. Currently the landfill receives approximately 232,000 metric tons of waste each year and is designed to remain active through 2025.

In 2006, Stones Throw initiated development on Phase 1 of a landfill methane gas collection and destruction system. This system includes vertical and horizontal gas wells, collection laterals, a blower, and a flare to combust the gas.

In April 2010, the project became operational and applied as an offset project to the Climate Action Reserve (CAR). A second phase, to make beneficial use of the gas for electric generation, is under study. Stones Throw’s methane capture and destruction project was approved by CAR in 2010, and it is expected to eliminate methane emissions equivalent to 261,000 metric tons of CO2 over the next 5 years.

This project collects and destroys landfill gas otherwise emitted from the landfill. Landfill gas includes methane, a major greenhouse gas. Municipal solid waste landfills are the third largest source of human-related methane emissions in the United States. Collection of the landfill gas typically reduces odors associated with the gas. The collected gas provides a future opportunity to make beneficial use of the gas for electric generation, creating further environmental benefits to the community through the displacement of fossil-fuel power generation on the grid.

There are no significant negative impacts. The project will require the use of equipment that consumes electrical energy, however, the amount of this energy and its associated environmental impacts are expected to be minimal in comparison to the overall environmental benefits of the project.