For companies committed to carbon neutrality, eliminating natural gas emissions is tricky. Companies can reduce consumption through installing efficiency measuring, electrifying equipment, or procuring renewable natural gas. Yet long-term purchases of renewable natural gas have not taken off like renewable energy PPAs. The premium required for RNG is primarily to blame. While electric renewable pricing competes with conventional energy, renewable natural gas procurement is at least twice the cost of conventional gas. The University of California system recently ran an open solicitation to procure RNG over a twenty-year period and received 25 project bids from 14 suppliers across the United States. They report the median levelized, nominal price proposed was $13.73/MMBTU – more than four times the amount they currently pay for conventional gas. 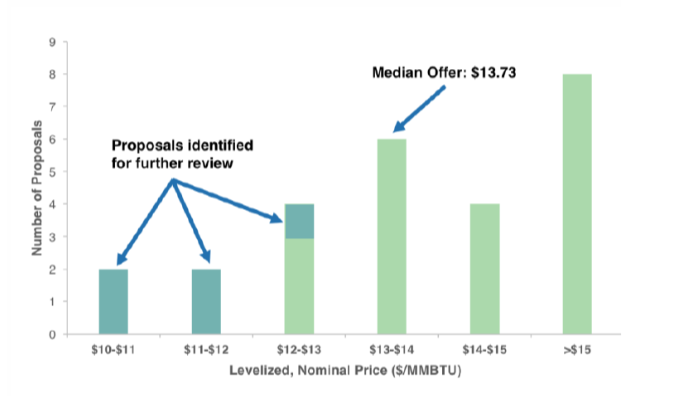 This $10.43/MMBTU premium (above the $3.30/MMBTU they currently pay for conventional gas) is equivalent to paying a nearly $200/mtCO2e carbon price to attain carbon-neutral gas. As quantified in the table below, this price can vary from roughly $80/mtCO2e (at the estimated levelized cost of producing many sources of RNG) to $315/mtCO2e (at the price required to quickly procure RNG on today’s market).

This premium is driven by Renewable Identification Numbers (RIN) for compliance with the federal Renewable Fuel Standard and Low Carbon Fuel Standard (LCFS) Credits in California or Oregon’s Low Carbon Fuel Standard. The table below outlines the value of RIN and LCFS credits to a variety of different sources of renewable natural gas that can demonstrate a contractual pathway that their fuel is being used as transportation fuel in vehicles.

How can companies with carbon neutral commitments currently using voluntary offsets, which generally cost between $5 to $20 per mtCO2e, justify this order of magnitude increase in carbon costs? Recent transactions from both L’Oreal and the University of California demonstrate that by procuring RNG long-term and then selling RNG and its RIN and LCFS credits in the early years, companies can use revenue from RIN and LCFS markets to buy down the premium they pay. L’Oreal, for example, sells on the RNG it contracted to purchase and instead offsets the greenhouse gas emissions associated with its conventional natural gas usage. University of California, whose carbon neutral commitment doesn’t begin until 2025, plans to do the same: “the university is proposing to sell all or part of the biomethane attributes for some period before 2025. At the beginning of 2025 the university intends to supply its campuses with the biomethane production to meet its carbon neutrality goals. This will generate revenue at the outset of the project and lower the net cost of biomethane to UC campuses after 2025 for the life of the project.”

Companies guaranteeing to purchase RNG at a long-term premium and then buying down that premium through RIN and LCFS sales are taking a risk on the value of RIN and LCFS credits. How much risk exactly? NativeEnergy’s modeling indicates that if current market prices hold, companies can turn their natural gas procurement into a revenue source if they are able to procure RNG at a relatively low cost and sell RIN and LCFS credits through 2024, as outlined in the “upside scenario” below. Assuming gas is slightly more expensive, RIN and LCFS prices cool, and gas is procured at the median price offered to the University of California system, procuring RNG breaks even with the cost of conventional gas (but provides the added benefit of carbon neutrality) as outlined in the “management scenario.” The true risk, however, would be for projects that procure gas at very high prices and then have the RIN and LCFS markets collapse. In this “downside scenario” procuring natural gas ends in a significant loss.

Comparing the cost of procuring fossil natural gas to RNG, with early sales of the RNG and its RIN and LCFS credits to buy down the premium paid. The scenarios presented below to compare RNG costs to commodity gas costs for a company who demands 4.4 million MMBTU of natural gas each year, has a carbon neutrality commitment in 2025, potentially faces a carbon price for the emission of conventional natural gas beginning in 2025, and is working with a landfill project.

All these models assume that the client procuring the renewable natural gas long-term does not have vehicles that run on natural gas and therefore must sell on its RNG to generate RIN and LCFS credits. Yet for those with natural gas vehicles internally, RNG presents a particularly attractive method to reduce scope 1 emissions. These entities can claim zero scope 1 emissions from their use of renewable natural gas, and still sell both RIN credits (which only make a claim to the “renewableness of the fuel”) and LCFS credits (which only make a claim to the lifecycle carbon intensity, not an ownership of any particular emissions or emission reductions along the way). Entities with CNG vehicles therefore do not have to sell their renewable natural gas in the short term, like the University of California or L’Oreal, in order to generate RIN and LCFS revenues.

RIN and LCFS prices send an overwhelmingly strong price signal for RNG to be used as transportation fuels. Other uses cannot compete against RIN and LCFS prices, so companies like L’Oreal and University of California are demonstrating that these markets must be used to buy down the long-term premium of RNG procurement.