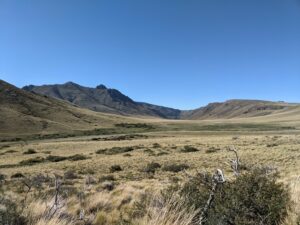 The Patagonian grasslands, covering 219 million acres of land across Argentina and parts of Chile and the Falkland Islands, are home to an array of native plants and wildlife including guanaco, maned wolf, and Darwin’s rhea (a flightless bird that can run up to 35 miles per hour!). Ranching on these grasslands – mainly of sheep for high-quality merino wool – has been a significant source of cultural and economic value for Patagonian people over the last two centuries, but unmanaged continuous grazing has led to overgrazing, desertification, and losses in soil carbon, habitat, and rangeland productivity. Improved grazing practices can help to regenerate soil, habitat, and plant life on this precious landscape.

And that’s what Native is working to help livestock producers do in the region, with the help of our partner Ovis 21, a Savory Hub in Patagonia. Native has been building a regenerative grazing climate project with Ovis 21 and ranchers in the region for years now, but the pandemic got in the way of plans to visit them in person. This January, two members of our team – Kirsten McKnight, who leads on development of nature-based solutions, and Erik Rieger, our expert on soil carbon analysis – finally made the trek to Patagonia in person.

They were greeted by Pablo Borrelli, who heads up research and training at Ovis 21. 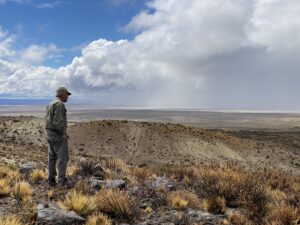 From Esquel in Northern Central Patagonia, Pablo has been invested in understanding and restoring the Patagonian landscape for his entire career, especially focused on rangeland management. “His plant identification skills and his ability to interpret where livestock have been and how they are grazing are unmatched,” said Erik. He even wrote the definitive chapter on Patagonian drylands and grasslands in the most recent FAO Grasslands Guidance.

One of the key goals of the visit was to initiate soil carbon measurements on a number of ranches in the region, which had two purposes: 1) to gather baseline soil carbon data for the initial ranches that participate in the project, and 2) to calibrate and validate a biogeochemical model, which can be used to project soil carbon outcomes in the region resulting from improved grazing. 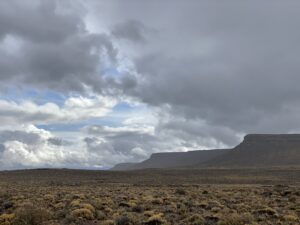 Pablo introduced Kirsten and Erik to Eduardo and Gabriel, the main leads for this soil sampling campaign, as well as other members of the Ovis 21 network: Orlando, Agustina, and Pancho. Eduardo and Gabriel have signed up to travel over 1,000 miles north and south across isolated areas of Patagonia to gather soil samples that will help the project to accurately represent soil carbon levels and accrual potential in the region. These two are young ranchers themselves, and they also work with Ovis 21. Kirsten and Erik were there to train them and the larger Ovis 21 network on the soil testing protocol in the field. So into the field they all went: to La Trinidad, a ranch owned and managed by Jorge Sepulveda.

La Trinidad is a remote ranch covering 12,000 acres, currently with little to no fenced pastures.  With carbon funding from the project, Jorge plans to start by creating a spring pasture, summer pasture, and fall pasture, with winter grazing on a relative’s land, allowing each pasture to rest and regrow for at least ⅔ of the year. Sampling this vast acreage required remote overland driving and hiking 5-10 miles per day over rocky basalt outcrops, steep hillsides, and mesas. “The remoteness and ruggedness out there is really hard to put into words,” said Erik. As the group walked the land to sample at different sampling points, they noted signs of significant degradation, including large segments of bare ground, sparsely populated by tussock grasses with eroded root pedestals. A small portion of dense, grassy meadows signal plenty of room for regeneration.

In the end, it took almost three days to complete sampling across La Trinidad. This is – obviously – a challenging place to sample. So why do it? Because carbon funding would be a true game-changer for ranches like La Trinidad. Native and Ovis 21 believe that Jorge and the other first project participants can be leaders for other producers in the region, demonstrating how regenerative ranching can work in practice on their land.

“Being with Jorge was really incredible,” says Erik. “His warmth and his motivation as one man striving to effect climate change are the heart of sustaining the world’s grasslands and vibrant agricultural communities.” 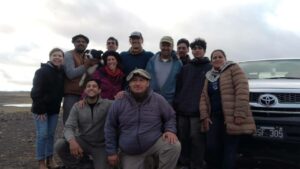 Previous StoryRunning Towards Change, One Event at a Time: A Conversation with Terry Chiplin
Next StorySummer Updates from Milton Ranch